[documentaion] And here we find a Vorlon content in his own home.. the computer world. [/documentaion] 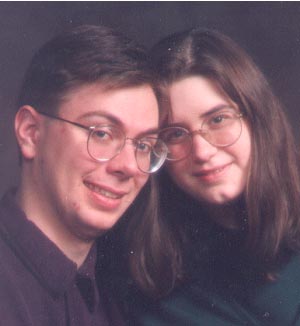 As most people know, Steve and I have developed our friendship past the.. friends don't do that stage... We met through James and Nathan on Dodds, and our friendship blossomed quickly and quite beautifully.

Steve has always been one of my dearest friends, one of which I could never expect anyone to match his caring and... odd.. nature. There is so much I could say about him, and so much I wish I could express, but alas. There's no real way to explain how much he truely means to me, and always has.

In April of 1999, we decided to further our friendship into the relationship that was attempting to bloom. Before long, we were talking about long-time arrangements of our relationship and where it was taking us. In December, on New Year's Eve (Nono, it wasn't a romantic oversight on his part. It was 'just the right opportunity') Steve officially proposed (Yeah, I guess that's what you can call it) with a ring he'd had hidden in his pocket for some 2 or 3 days, waiting for just the right moment. I didn't cry, as most girls normally would. Rather, I stopped breathing. I'm still not sure if that was due to the shock that he actually proposed, or that I was so incredibly frustrated with him for trying to be sweet when we were in the middle of an 'argument'.. even if it was just a fun argument!

Of course I accepted, and our plans have unfolded themselves very slowly before us. The date is set in July of 2001, to happen in a Catholic church in the Quad Cities area.

Back to my friends page?